Imports can be made in several ways:

There are different ways to import, depending on which browser is used

Firefox: When you need to get the references into Mendeley, click save in this box 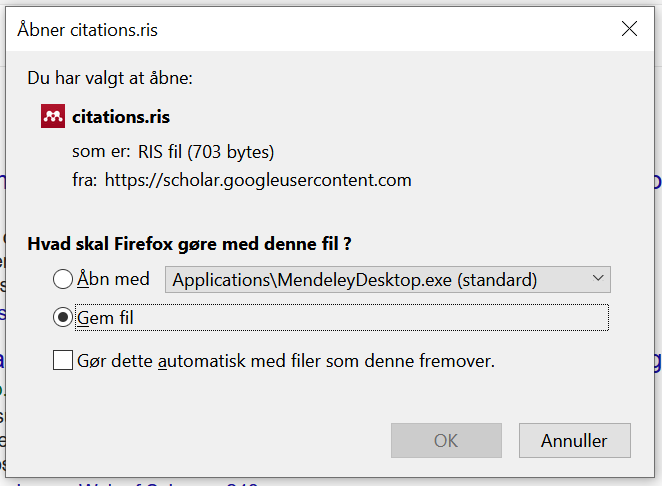 The downloaded file is displayed in the upper right corner of the address bar.

Make sure Mendeley is open and click the arrow.

Drag the file down over the Mendeley icon on the taskbar. Release the file once Mendeley has opened. If the file needs to be in a special folder, remember to have that folder open before you make a drag and drop

Make sure Mendeley is open and then drag the Notepad file down over the Mendeley icon in the taskbar, after which Mendeley will open.

Drop the file in Mendeley

ALWAYS REMEMBER to check the references you get from different databases and other places. Mendeley is a utility only and import errors may occur

If the reference list is not correct, it could easily mean a lower grade. Always talk to your supervisor about what he / she wants

In Firefox and Chrome the webimporter  is a Plug-in and will be located in the upper right corner of the Browser.

You can go from Mendeley Reference Manager - tools - Install Mendeley Web Importer, or you can go via this link https://www.mendeley.com/reference-management/web-importer/